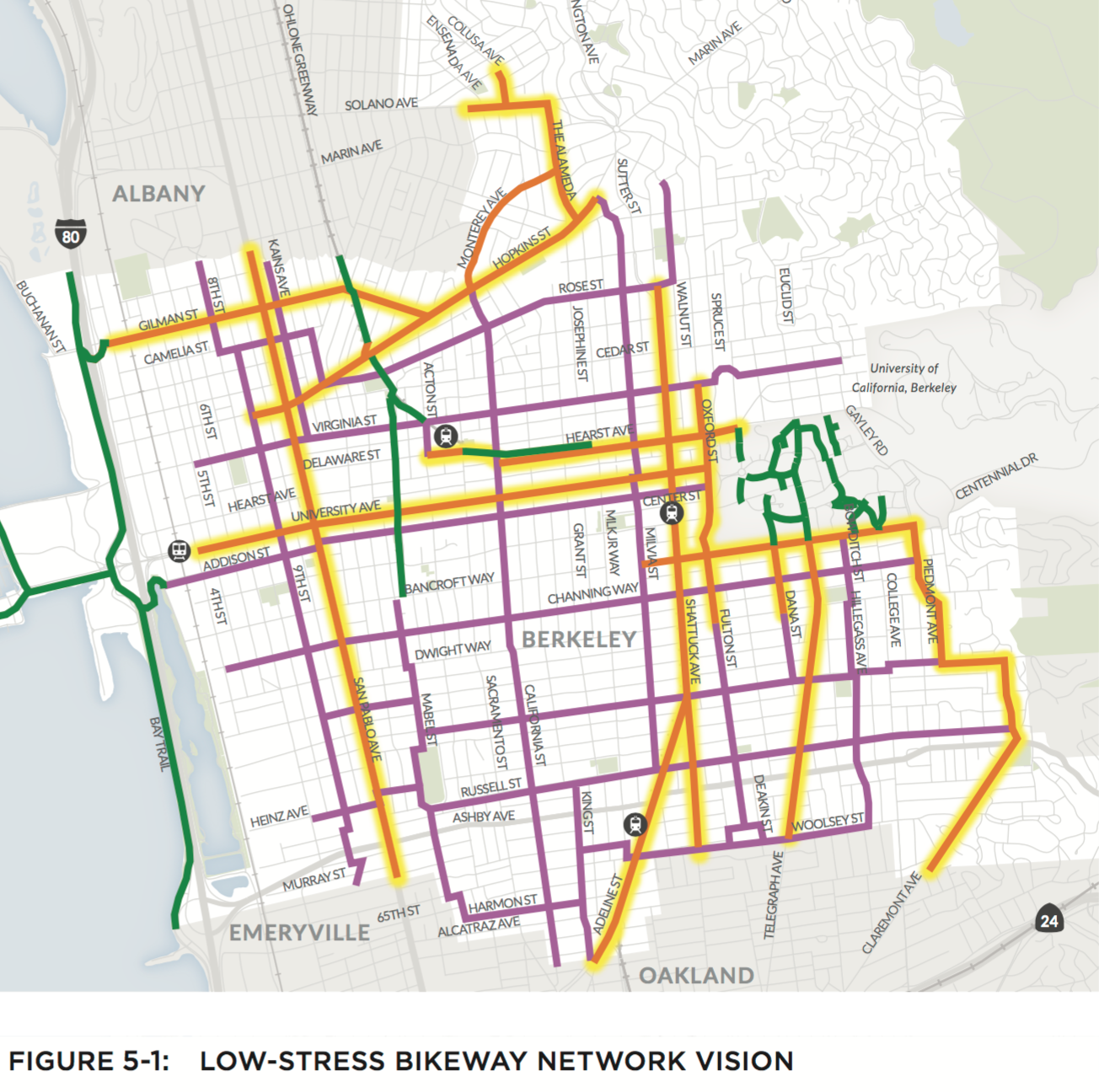 With many cities updating bicycle plans over the next few years, your help is needed to ensure they don’t repeat past shortcomings and limit the creation of a real bikeway network that connects you to the places you go. Next generation bike plans not only need to identify priority improvements, as past plans have, but also need to be smart about parking, realistic about traffic conditions, include transit improvements, and be ready to pilot projects, as past planning efforts often were woefully ill-equipped to do.

Over the past 15 years, cities sought to develop bicycle plans, and community-based transportation plans with bikeways, with an honest attempt to ask people what they want. Public outreach wasn’t neighborhood-by-neighborhood extensive, but was good enough to get a sense of what a small, but representative group of the public wanted. Bike plans focused mainly on bike improvements, and community-based plans asked about walking, transit and many other transportation issues in more geographically specific neighborhoods. Bike East Bay members were involved in just about all of these plans, from Richmond to Fremont and points east.

But these plans often did not include bike lanes where they were most requested. In Castro Valley, residents asked for bike lanes on Redwood Road; in Dublin, on Dublin Blvd; in Walnut Creek, on Main St; in Fruitvale, on Fruitvale Ave and in the Grand Lake District of Oakland on Grand Ave. Currently in El Cerrito, sharrows are being proposed for half the bikeway network, even though the public asked for dedicated bike lanes.

A couple of examples:

“Significant interest in the installation of bicycle lanes on Fruitvale Avenue and Coolidge Avenue was expressed at the public meetings.”

“Removing one travel lane in each of these segments and converting the width to Class II bike lanes would cause significant motor vehicle congestion along Fruitvale Avenue.”

“I would like to see Ashland community with Class II bicycle lane facility along E. 14th Street.”

“A Class II bike lane along East 14th Street/Mission Blvd. is not feasible due to insufficient width to add bike lanes, impacts on travel lanes and parking for local businesses.”

In each case, planners struggled to find ten feet of real estate needed in order to have bike lanes in each direction–space currently used to move or park cars. Either traffic forecasts said all travel lanes were needed or local businesses and residents reinforced a misperception that adjacent on-street parking was essential. Planners threw up their hands and offered up ‘sharrows’ because they were not equipped to deal with the challenge.

What could have changed the outcome back then and can change the outcome going forward? Many things.

Every bike plan should have a vision bike network that reflects the public input received on the bike plan, regardless of any perceived constriants or political challenges. The vision network should designate the streets by name and include the type of bikeway recommended for each street. This is an absolute bottom line for Bike East Bay. We have seen enough, and hopefully seen our last, bike plan that is a compromise document reflecting as much staff’s and elected officials’ ideas for what’s acheivable as compared to the public’s clearly stated preferences for better bicycling.

One particular reason to have a vision network is that conditions may change in the future. Funding opportunities can expand, as they have recently done with Alameda County’s passage of Measure BB and increases in the State Active Transportation Program. Also, political leadership can change, which can make all the difference. And finally, traffic conditions can change. While this does not happen as often or as quickly as we would like, it is happening more and more.

Community engagement for bike plans needs to target at a minimum a reach of 1% of the population of a city. For a city such as Berkeley, that’s 1000 people, and Berkeley exceeded that target. For a city such as Pleasanton, it’s around 800, but Pleasanton came no where close to that. In addition, there has to be meaningful and accessible opportunities for engagement by the public. There needs to be an online survey and mapping tool, and there needs to be weeknight  workshops with dinner (for the kids) and weekend workshops with childcare. Finally, outreach needs to geographically representative of a city.

As part of public engagement, cities should document public input, summarizing it and making it easily comprehended by member of the public, and be fully online. In the end, the proposed bike plan should be a reflection of its public input, and that public input has to be representative of everyone who bikes, and is interested in bicycling, and the only way to know if the preceding has happened is if public input is well documented. Bike plans and community transportation plans need to be better-funded so that they include analysis of parking utilization, its management and potential replacement in the vicinity of a project. No bike plan to date has looked at this potential opportunity to create more roadway space for bike lanes. Parking utilization on Telegraph Ave in the KONO District showed parking was on average empty 40% of the time. That helped make the case for removing some parking for protected bike lanes. The GoBerkeley parking program has shown that smart parking management can result in a 30% increase in parking utilization, which creates a huge opportunity to repurpose parking space for protected bike lanes. Where plans propose bike lanes on constrained corridors, they should have a full analysis of parking issues.

Second, planning efforts need to analyze traffic from a more wholistic approach and not just focus on the busiest 15 minutes of the day, as currently happens. While our preference is to deep six all traffic studies and put an end to the profession, until then, traffic studies have to at least look at normal, average conditions for the street throughout the day, and they need to do this with current traffic conditions–no bike plan should require a crystal ball to guess how many future residents, some not even born yet, are going to drive. A current year approach to traffic analysis may come with new state rules next year, but there will still be a lot of local public outreach needed to convince skeptical residents and local businesses that today’s users of our streets are more important than people who may move into a neighborhood in the future. And this analysis has to look at cut-thru traffic vs local traffic. Drivers who hurry past local businesses without stopping need to have a different priority than drivers who stop and shop. Third, plans need to do statistically accurate public opinion surveys that gauge what the general public thinks whether or not they regularly bicycle. Most plans conduct online surveys or do outreach at public events, libraries and community centers, or on social media, but this reaches a limited audience. By contrast, Berkeley did a statistically relevant public opinion survey for its bicycle plan update and Alameda is about to do so, and both are learning a lot from people who don’t currently bike but would. Such broad based surveys ask the important overlooked question: “If you don’t currently bicycle, what would it take to get you to consider bicycling?” The answers provide needed insight into how many residents potentially could bike and how encouraging more people to bike requires much more than sharrows on busy streets. These surveys show that redesigning streets for people does not reduce the overall number of customers for local businesses, but rather converts some from driving, making it easier and more convenient for all shoppers to shop locally.

On a related issue, Oakland surveyed residents and businesses within 400 feet of Telegraph Ave and asked them what improvements they would like to see on the street. 4% of the surveys were returned, about 1,100, a terrific response rate. With this relavent info, Oakland was able to justify significant changes to Telegraph Ave on the basis that local residents and businesses wanted change. When vocal local stakeholder #1 stood up at a community meeting and said “no one wants a bike lane on Telegraph,” Oakland was able to respond “well, actually, 53% of people driving Telegraph want a bike lane as their highest priority improvement.” A similar survey of San Pablo Ave in Berkeley showed the same results. Bike plans and community plans don’t do this type of project specific outreach, but it is needed before significant changes are approved.

Next, plans need to include bus service improvements and traffic light coordination for better traffic flow and transit on-time performance. The combination works to maximize traffic flow with reduced physical space for cars, and thereby give commuters other options to leaving the car at home, while also improving the commute for people who need to drive. For example, a road diet with proposed bike lanes could slow down buses because it requires removal of a travel lane. However, by adding additional improvements to speed buses up, such as bus queue jump lanes, in-lane boarding islands, and traffic signal interconnect, the project becomes a win-win. Actually, it makes it a win-win-win, as more people ride buses they consider bicycling options and visa versa. It happens when commuters start driving less and commuting more by other modes. As they do, they consider all their options, and with better transit ridership, we see more bicycling.

To the extent there remain challenging projects to include in bike plans, an additional tools is the ‘pilot.’ Cities should plan for one-day street redesigns to test road diets and protected bike lanes, etc, much as Bike East Bay has done in Oakland, Berkeley and Castro Valley recently. Pilot projects address neighborhood concerns about congestion and parking and allow local residents and businesses to get comfortable with changes to a street before permanent improvements are implemented. If adjustments are needed, they are made based on actual data, not forecasts and fears of change.

Would bike plans developed this way really change anything? Absolutely and for two key reasons: 1) such plans would have a strategy to find room on just about any street where the residents are asking for bike lanes, using new tools to analyze parking and transit improvements, and 2) we know much more now than we knew years ago about how to pilot a new bike lane project and allow the public to get comfortable with the changes before they are permanent.

So, to review. Each bike plan should include: