While on a bike, what’s more important to you–your time and money or your safety and enjoyment? Cities around the US are building modern protected bikeways that are safer and more enjoyable than the bike lanes and sharrows you grew up on. Traffic engineers are starting to separate you from traffic by placing the bikeway next to the curb away from traffic, and moving travel lanes and parking lanes out into the street, where they belong. By placing you next to the curb, you ride where you instinctively feel safer, and by keeping you there throughout your commute, you enjoy the experience more and are motivated to get back on your bike for your next ride, and encourage your friends to join you.

While riding a protected bikeway, you avoid double-parked trucks, and cars pulling into and out of parking spaces, and you also avoid jockeying with buses stopping to pick up passengers. All of this vehicle activity happens on your left away from the curb and away from you and your bikeway. By getting you out of traffic, protected bikeways are proving much safer and eminently more attractive to new riders, and are exploding across the US. They are the types of bikeways that people from 8 years old to 80 years old can enjoy. 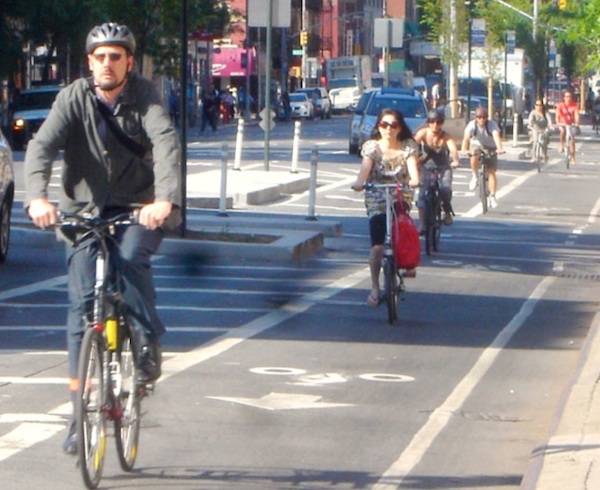 Several cities in the East Bay are upgrading bikeways with buffered bike lanes and green paint-both much needed improvements that are not expensive at all. Some East Bay cities are designing protected bike lanes and safer intersections with bike boxes and bike traffic signals, which significantly improve your safety but start adding some cost to projects. However, only a few East Bay city have built parking-protected bike lanes like Chicago and New York are doing as a matter of course, much less a network of these facilities, which is what it takes to create mode shift from driving to bicycling. Shown here is the 9th Ave protected bike lane in Manhattan.

Building protected bikeways is a trade off worth your input as we seek the optimum balance for tomorrow’s modern bikeways. To explain why, start by asking yourself which you would rather have: a lot more streets upgraded with regular bike lanes to make it safer for those currently bicycling, or a fewer number of streets upgraded with awesome protected bikeways that are safe for everyone to use–new bicyclists, kids, and senior citizens alike? Cities can build more of the former and fewer of the latter, given limited staff and money.

Bike lanes are cheap to stripe and work reasonably well for enthusiastic bicyclists comfortable using them. They are often relatively quick to get around on—they don’t cost you a lot of time and can even save you some. Protected bikeways, on the other hand, require a more measured approach to safely getting you through busy intersections—you can’t get around in them quite as quickly but you get through them safely. Protected bikeways are also more enjoyable to use because you are physically separated from traffic and when built with a width of 8 ft or wider allow you to ride side-by-side with a friend. On 2-way protected bikeways you can high five your friends passing by the other way. 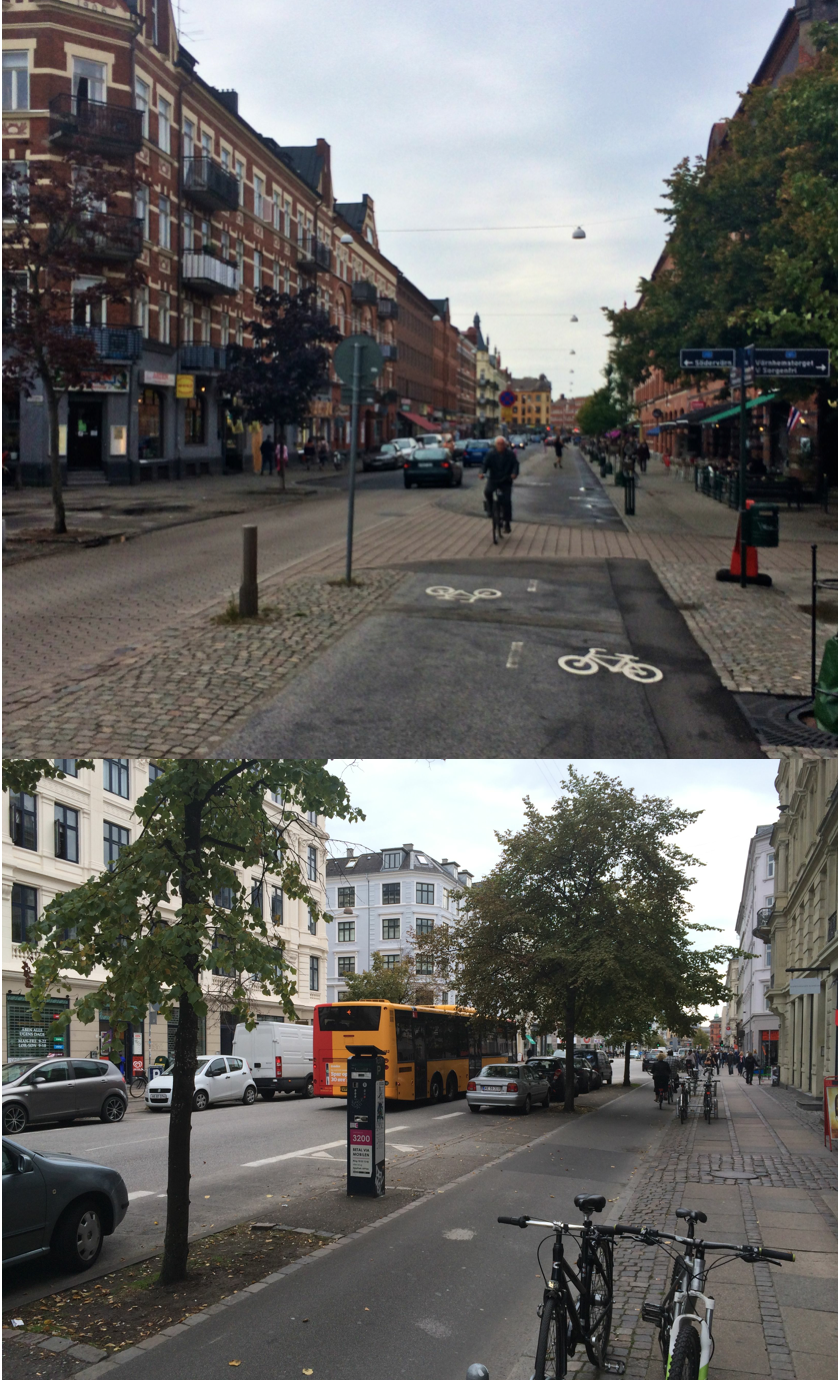 Take a look at these two photos.  The top photo shows a 2-way protected bikeway in Malmö, Sweden, in a dense part of town. It’s adjacent and raised up to the level of the sidewalk and was built on what used to be part of the roadway. On it, people ride on the same side of the street, on the 2-directional bike-only path, which means some people are bicycling against traffic, albiet safely separated from that traffic. It’s well-designed and has proven extremely popular, as 30% of trips are made by bike in Malmö. In fact, Sweden is the 4th most popular country for bicycling in the world and has one of the lowest collision rates of any country. Both 1-way and 2-way protected bike lanes can be ‘protected’ by parked cars, which adds an additional level of safety and comfort, and they can be raised partly or all the way up to the level of the curb, as shown in the above photos. And on both 1-way and 2-way facilities, you don’t feel like you are mixing with cars. At intersections, 1-way protected bikeways sometimes merge with right-turning traffic, although they don’t have to. They can remain segregated from turning traffic by extending the bike lane up to the intersection and providing bike traffic signals where needed to prevent cars from turning right while bikes go straight. Shown here is Copenhagen’s preference for extending the bike lane all the way up to the crosswalk, while maintaining a vehicle set back. On 2-way cycle tracks, there never is a merge zone and bike traffic signals are provided at every intersection. Either way, segregating turning movements of cars and bikes slows you down as you ride and is more costly to design and build, but is way safer and more enjoyable for most people.

Answering our question of preferences involves trading off your desire to save time and cities’ desires to save money vs your desire for increased comfort and cities’ desires to encourage more people to bicycle. 1-way protected bike lanes are less expensive than 2-way, and for this reason a city can build more of them. But they also are often designed to transition to merge zones at intersections to allow drivers to turn right. This mixing of traffic is familiar to many people who bike, but discourages many others who would ride but don’t because they feel it’s unsafe to ride with cars. It’s a bit of a compromise between accommodating people who currently ride with encouraging more to ride.

2-way protected bike lanes completely separate movement of cars and bikes at intersections. This approach is safer and certainly is ‘perceived’ as much safer, and is a bit more social as it allows you to ride side-by-side on a wider facility and chat while you ride or high five people riding the opposite way. However, it is also more expensive and adds time to your bike trips, as you have to wait at each intersection for your bike traffic signal green phase.

Popular European cities for bicycling, such as Amsterdam and Copenhagen, use both 1-way and 2-way protected bikeways, but Copenhagen has a strong preference for 1-way designs while Swedish cities seem to prefer 2-way designs. In the US, Indianapolis built a network of 2-way cycle paths throughout their downtown called the Indianapolis Cultural Trail. It sees high volumes of people walking and bicycling, and has been an economic boom to their city. However, it was expensive to build and for this reason is not quickly expanded and emulated on every bike route. 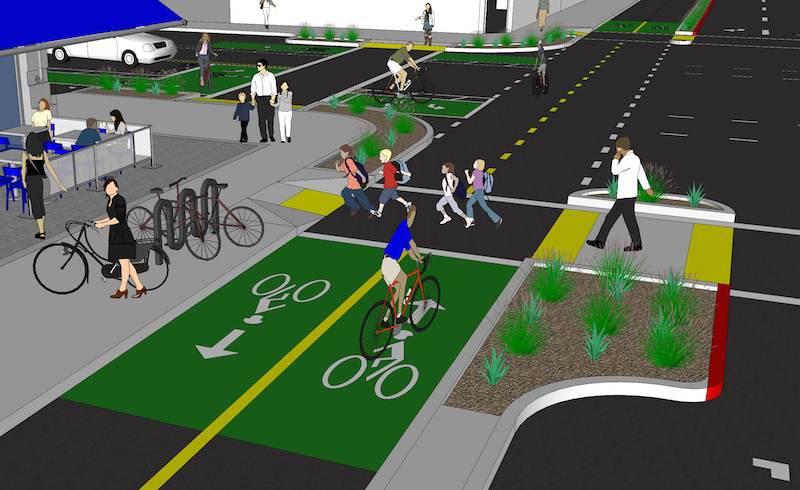 Oakland is building 1-way protected bike lanes on Telegraph Ave, right through the heart of the KONO District, as is El Cerrito on San Pablo Ave. Oakland is also studying the feasibility of a road diet on 14th St through downtown, in order to make room for a protected bikeway connecting Lake Merritt with Mandela Parkway and eventually the Bay Bridge bike path. Should 14th St be 1-way or 2-way protected bike lanes. Here is one option showing a 2-way design.

As cities in the East Bay move forward designing separated, protected bikeways, they need to address a key decision—what should their bikeways of the future look like. The bikeways should stay along the curb, but whether they are 1-way vs. 2-way is a trade off of money vs encouraging more people to ride. Check out Alameda’s 2-way cycle track getting constructed on Shoreline Drive or ride the 1-way protected bike lanes on Market St, Fell and Oak in San Francisco, and start thinking about which you prefer. There’s no right answer at this point, but your thoughtful input can help direct the conversation forward.

Join Bike East Bay to support these campaigns. Help us build more modern bikeways for you to ride everyday.