Thanks to joint efforts with Bike Concord and Bike Walnut Creek, the current designs are already an upgrade over the initial September 2015 Draft Plan for Treat Blvd.  After many requests from residents wanting real bike lanes on Treat Blvd, staff at the Contra Costa County Department of Conservation & Development Department revised their initial bike lane designs to include continuous, green bike lanes for the three blocks of the project.

However, the revised bike lane designs are still not fully protected and require you to navigate high-speed traffic past heavy right-turning drivers. For this reason, Bike East Bay is asking for three improvements to the designs:

Many attendees at a public workshop May 22 agreed that the revised designs are not good enough and still require a daunting experience bicycling east-west on this busy corridor. Hundreds have emailed and signed our petition for better bike lanes. Bike Concord, Bike Walnut Creek and the Delta Pedalers have all weighed in, as has Bike East Bay. See our letter of May 24 below.

Our December 2016 Update on Treat Blvd, with more background information.

RE:     Support for Treat Blvd Bike Ped Improvements and Request for Further Refinements

We support the improved, continuous green protected bike lanes of Revised Concept 4 for the 680/Treat Blvd Bicycle and Pedestrian Plan, but request three further improvements that to date have been ruled out over concerns that we feel can be addressed:

The problem with the current eastbound bike lane proposed design between Buskirk and Oak is that the bike lane is unprotected, has crossing car traffic at its merge zone, and is on the left side of moving cars, which is not where anyone is accustomed to bicycling relative to moving traffic. All of these shortcomings make for a daunting bicycle journey at best but also create safety issues, which can be avoided by eliminating the continuous right turn car lane, as proposed by the Alternative Concept.

Staff ruled out the Alternative Concept, and explained at the public meeting on May 22, that the Alternative Concept would back up traffic briefly during some morning commutes onto the freeway off ramps “all the way to NB I-680.” Table 1 shows this expected morning backup to be 1446ft from Treat Blvd, which by our calculations puts it here, right at the beginning of the off ramps: 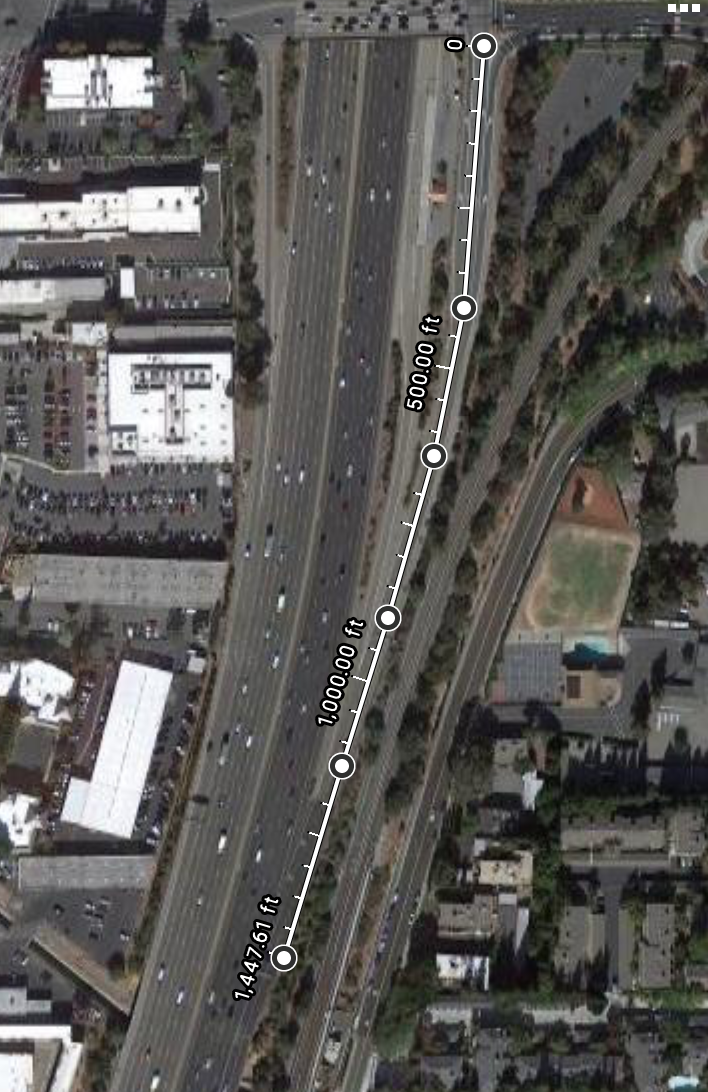 This expected backup can be sufficiently reduced by redesigning the NB approach lanes of the freeway off ramp to include a 2nd right turn option for turning cars, and thereby provide a dedicated right turn lane and a thru-right turn lane, in addition to the other two thru and left turn lanes. This revised design for the approach lanes should reduce backup queues by at least 25%, keeping traffic flowing safely on NB I-680.

Staff say they have not studied our proposal here, but staff could have met with us before finalizing with consultants what to study at this stage, as we made several inquiries on the status of this project. Regardless, there is a simple and quick and more reliable solution to further study–cone it off. Have Public Works cone off the fourth eastbound travel lane on Treat Blvd for one block and restripe the approach lanes as we propose or as was proposed in the original Draft Plan. Do it for one day, or two days if you like, to see that it will work just fine for moving traffic. Cone it off!

The September 2015 Draft Plan for this project showed Concept 1B to have curbside bike lanes up to intersections and much better designed merge zones for cars. They did not show bike lanes out in the street for long stretches between moving traffic on both the right and left, as now proposed and which is not only daunting but will not in our opinion encourage more people to bicycle to work and to BART. It is too scary.

Here is one of the original Concept 1B Intersection designs from the September 2015 Draft Plan, which we like: 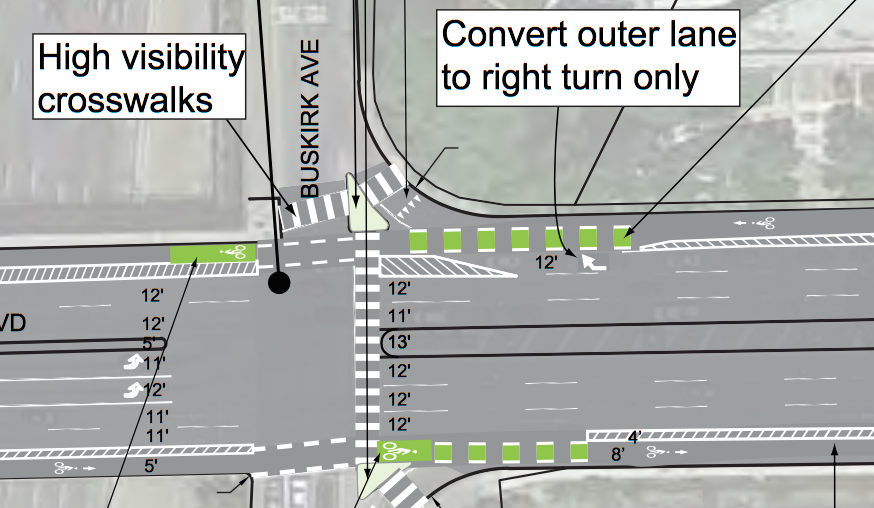 This is another design option shown in the Draft Plan: 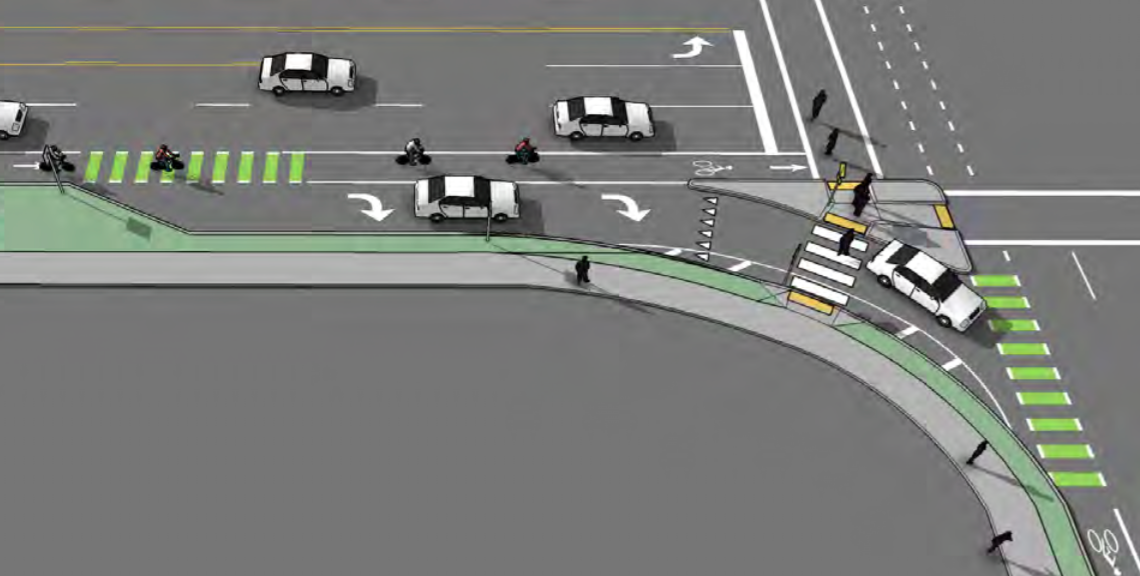 Both designs are superior to the current proposed thru-bike lane design where a person bicycling needs to move out into the street well before the intersection, and travel between two high-speed travel lanes. It is too daunting and dangerous.

Keeping the bike lanes curbside is important to create a safe, comfortable experience for people bicycling. If necessary, the crossing of the bike lane at the intersection can be signalized. Staff challenged our signal idea because it may not be compliant with the MUTCD. However, The National Academies Design Guidance for Channelized Right-Turn Lanes (https://www.nap.edu/download/22238) includes plenty of guidance on signalizing right turn channels. See Figure 15 and Figure 27: 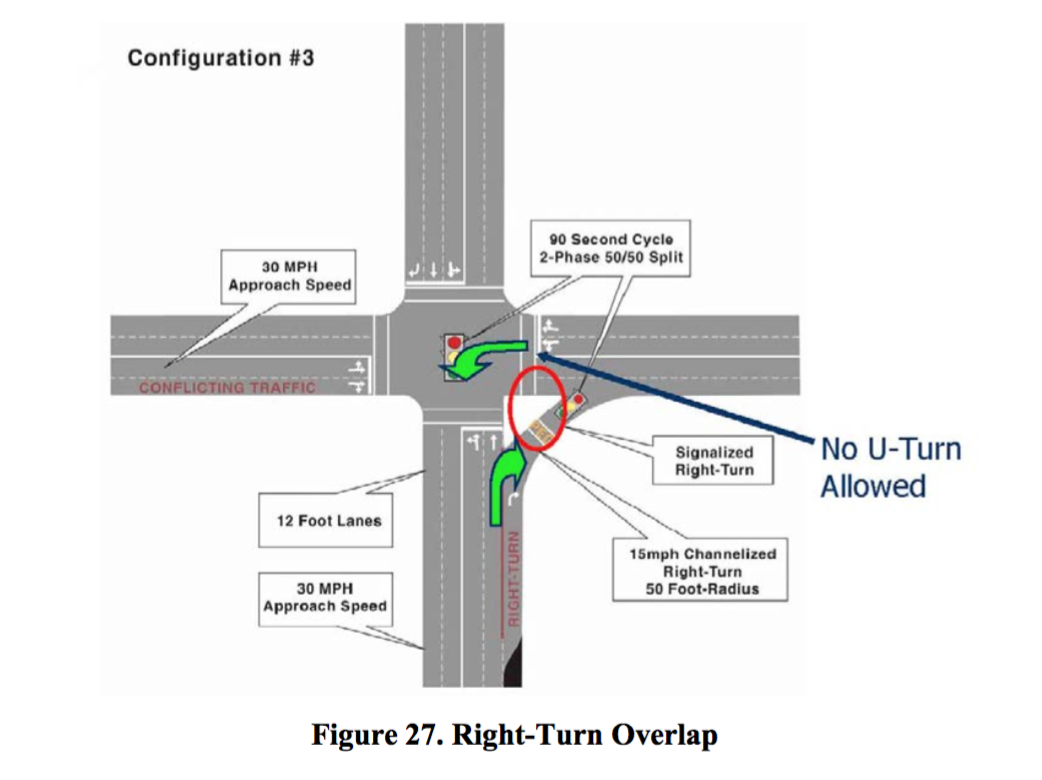 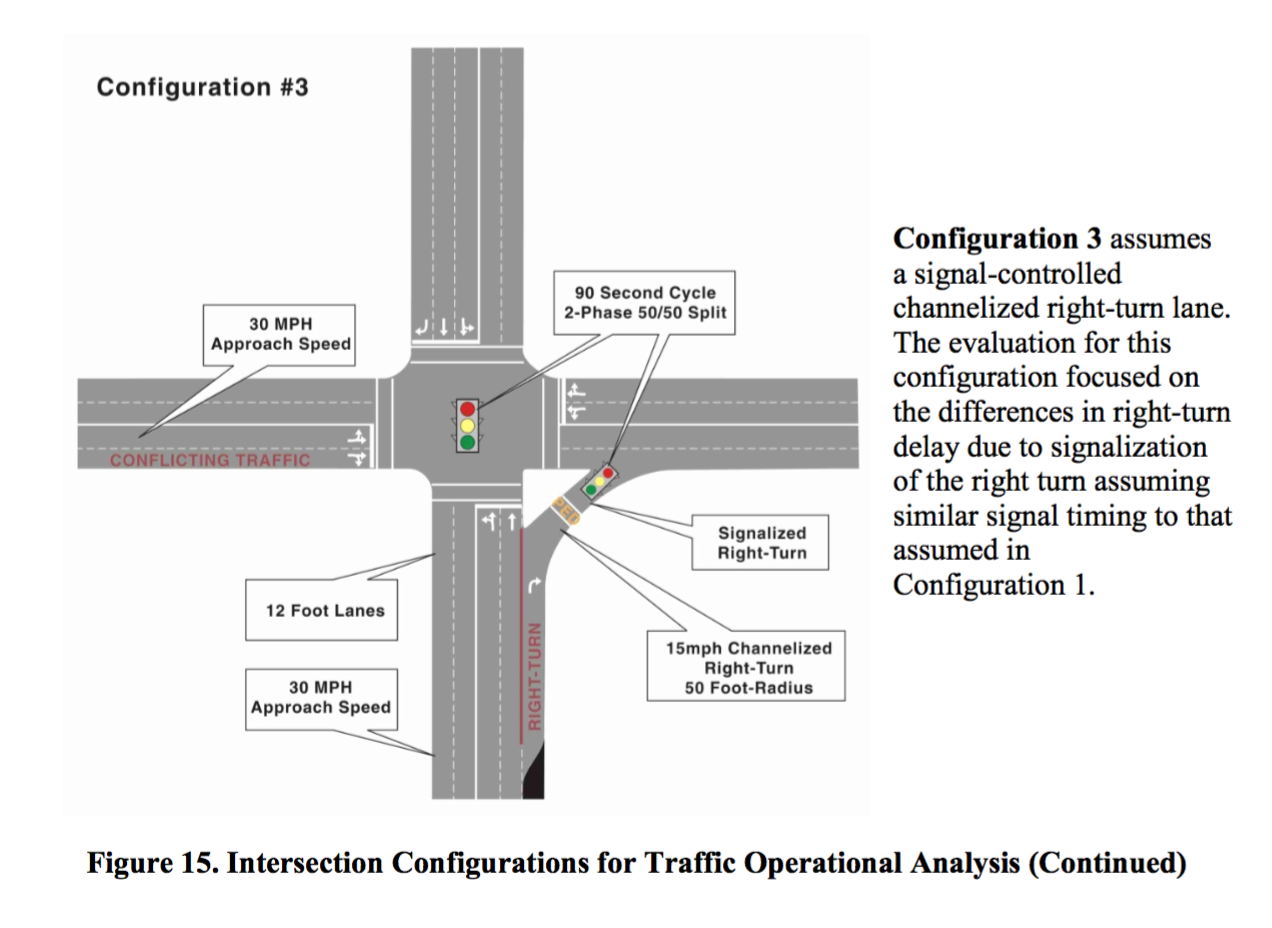 We believe the project can include protected bike lanes throughout the extent of the three-block project. For this, at least a two-foot wide buffer is needed, and is provided in the eastbound direction, but not in the westbound direction. To add a two foot buffer westbound, travel lanes need to be narrowed to 10ft - 11ft. We understand that at least one 11ft travel lane is needed the entire length for buses and trucks, but inside travel lanes can be narrow as needed to accommodate a two-foot buffer. The three westbound travel lanes are currently 11ft - 11ft - 12ft. This arrangement can be narrowed to 10ft - 11ft - 11ft. Staff expressed concern that narrower traffic lanes have not been studied and could impact traffic flow. Again, the decision to not study narrower lanes was not ours, but staff’s. Regardless, we do not believe that narrowing travel lanes to gain a two-foot buffer will have any measurable impact on traffic flow, and for this reason should not need to be studied. Fremont is routinely restriping streets with 10ft travel lanes and is doing so on busy streets near its BART stations. Please contact Hans Larsen of Fremont’s Public Works Department to learn more.

Thank you for considering and incorporating our ideas and comments into the next iteration of the project designs, and for keeping us posted on upcoming public meetings for the project. We would like to meet with you prior to any Commission meetings on the project to see how our three suggestions above can be incorporated.

Submitted by Dave Campbell on May 24, 2017 - 10:37am
Join Donate Volunteer
Learn
Attend one of our hundreds of free education classes. Learn to ride, attend family cycling workshops, or gain urban riding skills.