At the March 9 Board meeting of the Contra Costa Transportation Authority, some Commissioners commented that funding for bike improvements in a potential new Measure j can be accommodated through the Local Streets & Roads category rather than from a dedicated bike-ped funding category, and thus satisfy other Commissioners’ desires for fewer funding categories and more flexibility. Ten years ago, Bike East Bay hoped this were true and we often advocated for such. Indeed many Contra Costa cities were willing to add bike lanes where feasible in repaving projects. But times have significantly changed and dedicated bike ped funding is needed.

Contra Costa’s bike commute mode share is one-fourth that of Alameda County and one-seventh that of San Francisco County, as shown in this graph. 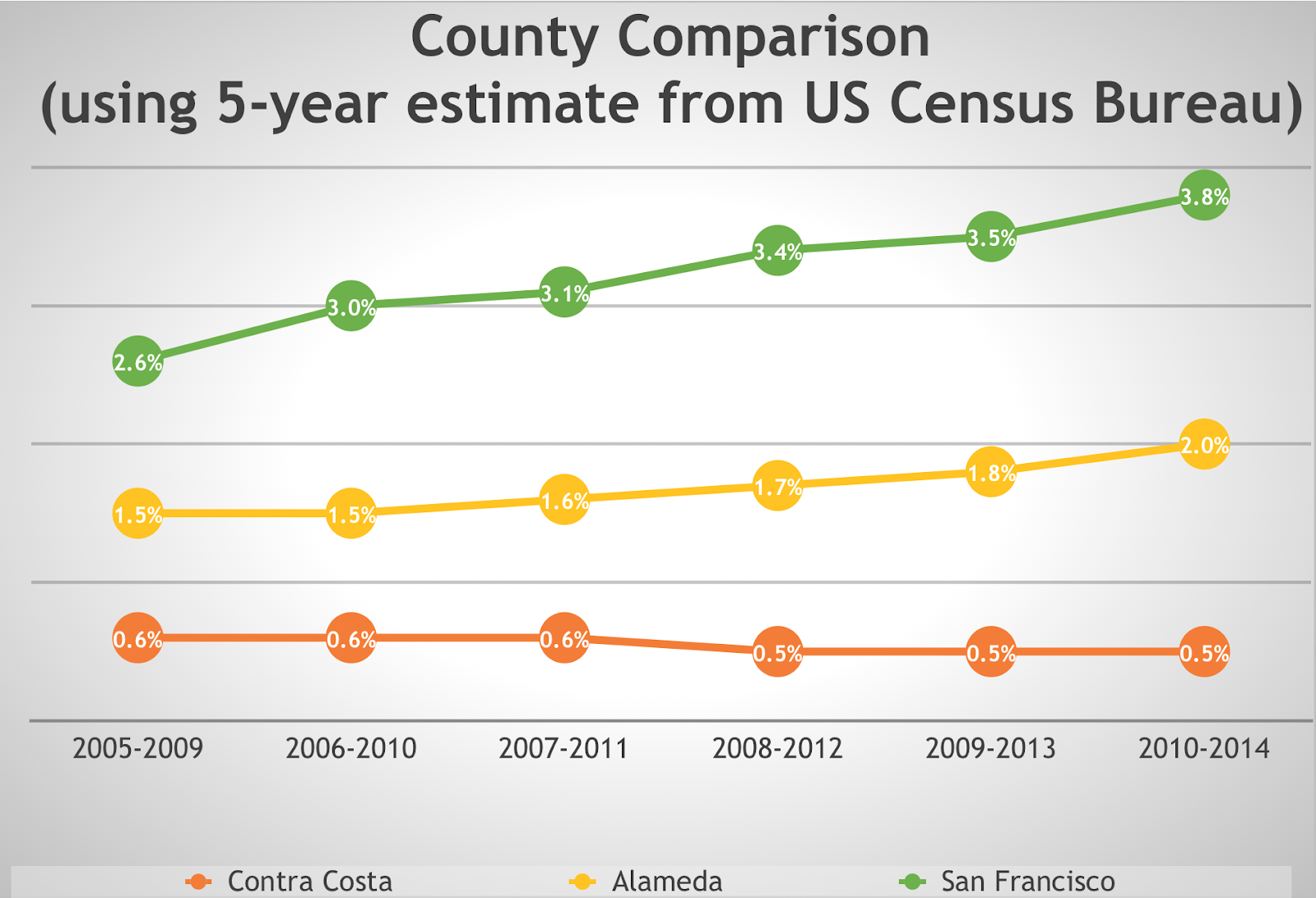 There is a reason Contra Costa’s bike mode share is so low and not trending upward–a lack of funding for bike projects.

In 2002, Alameda County dedicated 5% of Measure B money to bike ped projects and then in 2014 increased this funding to 11%. In 2004, San Francisco did Alameda County one better and dedicated 10% to bike ped projects in their Prop K sales tax measure and then in 2014 passed a general bond that included significant additional money for bike projects. As a result, Alameda County is set to spend $32 million/year on bike ped projects, while San Francisco spends $47 million/year. Yet in Contra Costa County, we spend less than $5 million/year, thanks to a paultry 1.5% of funds from the current Measure J. The results tell the story. Even our Countywide Transportation Plan predicts that Contra Costa’s bike mode share will remain at 0.5% in the year 2040, due to current funding levels.

As recently as 5 years ago, it was thought that striping a five inch wide white line for bicycling along the shoulder of a roadway and keeping roads in good condition was the way to get more people bicycling. We know now that this does not get us to our goals. Why?

Bike lanes are an improvement for residents already bicycling, but do not encourage many new people to bicycle. The reason for this is that a five inch wide white line on the road is not sufficient protection from traffic. Protected bike lanes are needed on streets with any significant amount of traffic, the types of streets where numerous destinations are located where residents go. 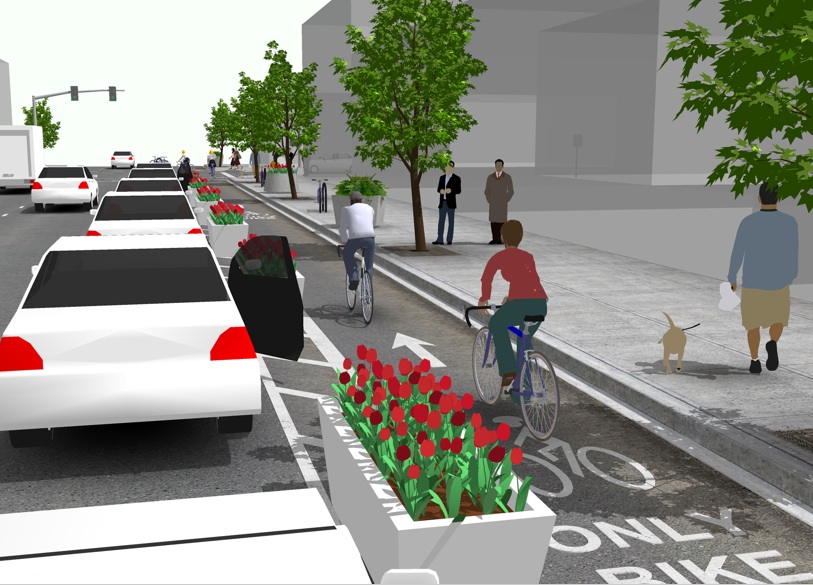 Protected bike lanes cost more money and include more design elements than white paint. They include various forms of physical protection from traffic, such as parked cars, curbs, planter boxes, upright flex posts or a raised surface. At intersections, traffic signal timing is often adjusted and bike traffic signals installed for safe crossings. On busy streets with bus traffic, bus boarding islands are provided. All of this costs money. On average, a protected bike lane project can cost ten times what a regular bike lane costs and often much more–$100,000/mile for bike lanes vs $1,000,000/mile and up for protected bike lanes.

Repaving Money More Precious Than Ever

With the loss of redevelopment and continuing drop in state gas tax revenues, cities have much less money than they used to have for repaving streets. State gas tax revenues have dropped 30% to date and will drop 50% next year. As a result, there is tremendous pressure to spend every dollar of repaving money on simply fixing the streets as they exist, and not adding improvements such as new or wider sidewalks, protected bike lanes, bus stop improvements, or traffic signal coordination–as cost efficient as that would be to do. Local Streets & Roads money in a new Measure J will be precious.

Modern Bikeways Are Built, Not Striped

Ten years ago cities striped bike lanes. Today they are building bikeways. Alameda County has built three protected bike lanes and has over ten more in the works. As explained above, modern bikeways on busy streets are protected from traffic and this protection costs money and requires many additional features to create a safe and comfortable experience for all users. A primary reason for this is that protected bike lanes are curbside rather than located to the left of parked cars. A curbsibe bike lane requires a form of protection from traffic and at intersections requires additional design elements to ensure that right-turning cars and thru and left-turning bikes can safely maneuver. Protected bike lanes require more space and more planning and traffic analysis to properly design, and this costs money, which all of the local streets & roads money in a new Measure J could not possibly provide.

Our Letter to CCTA Commissioners explaining why a dedicated funding source is needed for bike ped projects, and why $120 million should be directed to this category of projects.