Mayor Tom Bates has stepped up and will ask Berkeley City Council to support striping a Fulton Street bike lane by Bike to Work Day, May 12. Councilmember Jesse Arreguin is co-sponsoring this proposal. Come show your support and be part of a wake up call to the City of Berkeley to start building a network of protected bike lanes to keep residents safe.

Why: To call for Fulton Street bike lanes to be comleted by May 12 and to show the City of Berkeley that long delays in completing bike lanes is no longer acceptable, especially when these delays endanger bicyclists. We have discussed this project with Councilmembers Kriss Worthington and Jesse Arreguin, and both are supportive. We will be meeting with remaining Councilmembers to ask for a unanimous vote.

March 15 Council Item pdf
A huge community of support has rallied in response to Megan Schwartzman’s crash on February 2 on Fulton Street, right where the City last year repaved the street and failed to add the bike lane called for in Berkeley’s 2000 and 2005 Bicycle Plans. Megan’s family and friends are ready for Berkeley to do better, and so are we. It starts March 15 at City Council.
To show the Berkeley City Council how visible Megan was when she was struck by the driver on Fulton Street please wear high-visability brightly colored jacket or vest, wear your helmet and bring your rear red blinky light with you to council chambers. When our item comes up we will all turn on our blinky lights to show support for Fulton Street bike lanes, and to make the point that Megan was doing all the right things to be safe and visible on her bike.  We need protected bike lanes, because even the best gear does not protect you on your bike. For Berkeley to complete the Fulton Street bike lanes by Bike to Work Day, they need to do a focused traffic analysis on the two blocks of Fulton Street between Bancroft Way and Channing Way. Specifically, two things need to be confirmed:

Bike East Bay and a large community of planners, consultants and resident engineers in Berkeley are ready to step up and assist Berkeley in gathering and analyzing the traffic data needed to answer these questions. Once collected, Berkeley should be ready to issue a work order to their on-call roadway striping crews. This can be done by Bike to Work Day. Help us keep the pressure on to ensure it happens. History of Repaving Problems in Berkeley

In June 2015, Bike East Bay asked Berkeley to include a southbound bike lane on Fulton Street as part of its upcoming repaving, as well as bikeway improvements on several other streets getting repaved. The City responded that including the bike lane would require a traffic study and a public process for which there was not time or budget. The issue should be taken up in the City’s upcoming bicycle plan update, the City said. The City did include the short bike lane on Bay Street you see today, but again failed to complete that bike lane all the way.

On February 23, Berkeley finally responded to Bike East Bay’s letters and stated that they are considering adding a bike lane to Fulton Street, but not providing a timeline for completion, and implying that it could take many months.

On February 25, Bike East Bay met with Mayor Tom Bates to ask for City Council support to complete the bike lane by Bike to Work Day. The request goes to City Council on March 15, 2016.

To build a complete network of bikeways, both neighborhood boulevards on low traffic streets and protected bike lanes on busy streets, as well as off-street pathways, for Berkeley residents to safely and quickly get around town on. 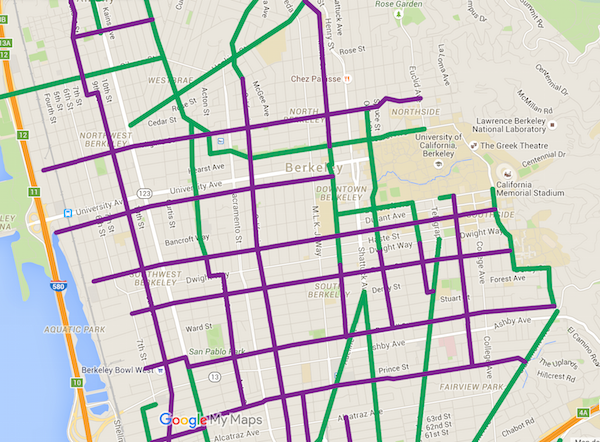 Here it is, shown right. Purple lines on neighborhood boulevards (or Bike Boulevards); green lines are protected bike lanes and off-street paths, such as the Ohlone Greenway and West Street Pathway.

Additional streets will also need improvements, such as Euclid Avenue and Tunnel Road, and many intersections will need to be completely redone with modern bikeway facilities, such as bike boxes and bike traffic signals for safe crossings. We hope you are excited to see the Hearst Avenue complete street project completed by the end of 2016, with protected bike lanes, bus boarding islands with curbside bike lane passage, bike boxes, and bike traffic signals. More on Hearst Avenue project here.

To support our hard work on your behalf to pressure Berkeley to do better, more and faster, please join/renew your membership in Bike East Bay, or make a generous donation to Bike East Bay. Thank you for your support.