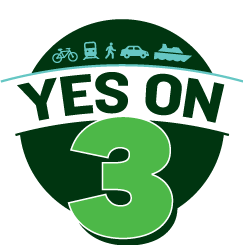 Regional Measure 3 is on the ballot in all nine Bay Area counties, asking voters to raise bridge tolls $1 next year (2019), and an additional $1 in 2022 and additional $1 in 2025. It needs 51% voter support (not ⅔).  A $4.5 billion capital plan has been developed outlining how to spend this new revenue, about which 75% goes to transit projects and 25% to freeway projects. The program also funds $150 million in Safe Routes to Transit Program/Bay Trail Projects, which is a program Bike East Bay and Transform jointly coordinate. Here is the complete list of projects and programs.

What we like: Bike East Bay fought hard last year to fund bike improvements with this new bridge toll money and while we did not get nearly what we asked for, it does increase the size of our Safe Routes to Transit Program 7 fold–to $150 million. 75% of all funding over 20 years goes to new transit services, mostly rail and ferries, but a decent amount goes to AC Transit. It also funds Clipper 2.0, which it is hoped will help the Bay Area one day to implement transit discounts for low-income commuters, a service under development. From a high-level perspective, bridge tolls paid for by generally more affluent commuters to fund transit is a good thing, especially when it also funds safe bikeways to transit.

RM3 also includes several capital projects in the East Bay from the 25% freeway category, and all of these could include bike improvements as well. In Brentwood, a new park ‘n ride facility will include a long overdue bike ped bridge over State Route 4 Bypass at Lone Tree Way. In Pleasant Hill, Bike East Bay volunteers are working with Contra Costa Transportation Authority to include a bikeway connection in an interchange project at 680/4, connecting the Iron Horse Trail and the Contra Costa Canal Trail; in Richmond, a pathway gap will be closed between the Richmond Greenway and the new pathway to the Richmond-San Rafael Bridge that opens early next year; and in the Sunal pass, a new interchange at 680/84 includes a bike path connection on SR 84 to safely cross I-680.

BART gets money for new train cars, half of their total need, which will expand bike capacity on the trains, as well as funding to finally connect BART to downtown San Jose and to an electrified Caltrain service. Ferry service, Capitol Corridor and AC Transit transbay services will expand too.

What we don’t like: RM3 includes some clunker stuff, mainly the freeway interchange improvements, the result of a political process to select projects up in Sacramento. We have worked to make sure freeway projects in the East Bay include bike improvements, but have not done so outside of the East Bay. There are some “not great transit stuff” too, such as BART to San Jose because BART did not ask for this, and $300 million to expanded ferry services, which is significantly more than this category deserves. There also is no equity component to RM3, and equity was really never discussed. Some advocates asked for more monies to go to affordable housing projects but that was dismissed, because RM3 was not believed to be the right way to fund affordable housing in the Bay Area and because the process took place in Sacramento. Finally, the process to develop RM3 was miserable, and done mostly behind closed doors.

Endorsements to date: BART, AC Transit, Capitol Corridor and ferry operators are supportive of the measure, as are our allies at Transform, San Francisco Bicycle Coalition and Silicon Valley Bicycle Coalition, who also all worked hard on crafting RM3. Safe Routes to School California and Rails to Trails support RM3. Both the Alameda CTC and the Contra Costa Transportation Authority endorse. So far, the Sierra Club and Transdef have stated they oppose, due to the freeway funding in the measure.

Bike East Bay’s Safe Routes to Transit Program has funded many bike projects in the East Bay that bike commuters have been enjoying for years. The program funded the Berkeley and Uptown Bike Stations, the Richmond-Ohlone Greenway Connection, the new bub bulb parklet on Solano Avenue in Albany, expanded bike access on BART, and Bailey Road bike ped improvements in Pittsburg. Here’s a map of all projects.