Sign up to volunteer on Telegraph. You can also email Info@BikeEastBay.org with comments.

Bike East Bay knows the Telegraph protected bike lanes are not perfect. Since cutting the ribbon on these new lanes in May, we continue to talk with residents, shoppers and merchants about what they think, and everyone adjusts to the new lane configuration, which puts bike lanes inside a row of park cars. Without a physical barrier between the bike lanes and car traffic, drivers continue to occasionally park and drive in the bike lanes. Bike East Bay is also seeking immediate improvements by working with Oakland’s new Department of Transportation and the KONO business district to install more vertical flex posts in the beige areas of the street. This visual signal should keep cars from parking in the beige areas and encourage more parking compliance. In addition, we are pushing Oakland to allow local artists to paint the street murals in the beige areas. Artwork would give residents and visitors an opportunity to show local love on their street, and it would look really cool.

Beyond these quick fixes, Telegraph needs crucial bike and pedestrian upgrades to make it really a complete project. These Phase Two upgrades include:

The good news is that these Phase Two upgrades are currently under review by Caltrans and will certainly be built thanks to newly allocated $6 million for the project. An additional $3 million has also been allocated to redesign Telegraph Avenue north of 41st Street to the campus of UC Berkeley.

The bad news is that the project is currently under review by Caltrans and could take until late 2017 or early 2018 to be built. This is too long in our book. Bike East Bay has met with Oakland’s new Director of Transportation, Jeff Tumlin, and urged him to make Telegraph Ave his highest priority bike project and expedite its completion. Stay tuned for our next steps as we push to fast track this project.

At the same time Oakland is working on Phase Two of Telegraph Avenue, they also will be working on a major street redesign of 20th Street, between Broadway and Lake Merritt, and Harrison Street from 20th Street north to Grand Avenue. The Harrison part of this project is Measure DD’s next major construction project at the Lake. Both Harrison Street and 20th Street redesigns will include protected bike lanes whose installation should go much smoother. Finally, Oakland has applied for state grant money to design and build protected bike lanes on Grand Avenue and 14th Street downtown. All of this will start to build a network of protected bike lanes in and around downtown Oakland. This network effect will be a game changer. 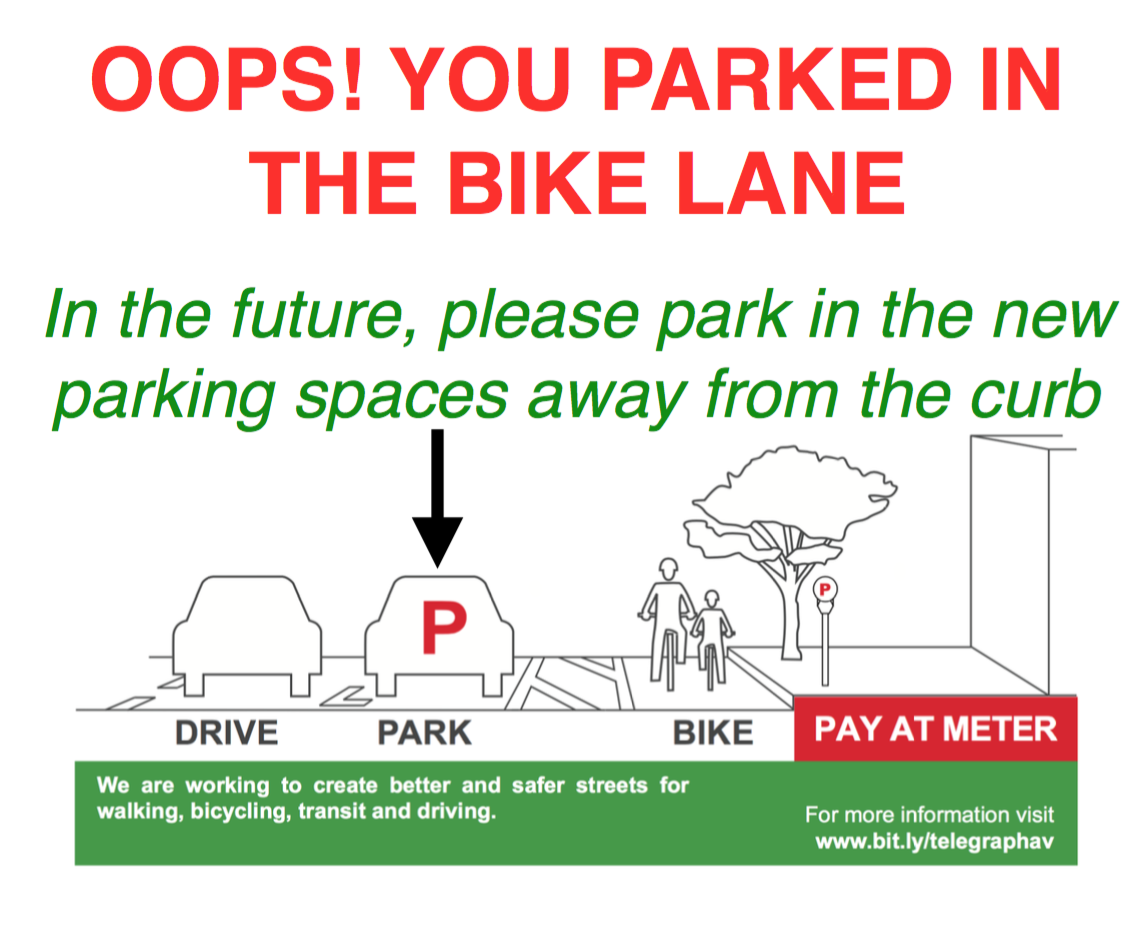 In the meantime, good ambassadors on the street are important to strengthen our relationships with local stakeholders. Protected bike lane projects like Telegraph are not a success until local businesses and residents say they are. It is best to politely remind drivers not to park in the bike lane by placing an “Ooops, you parked in the bike lane” flyer on their windshield or hand it to them if they are in the car. Pick these up at our outreach booth on Telegraph this August, come by our office or print out the jpg here.