If you agree, please send an email of support to Councilmembers Kriss Worthington and Jesse Arreguin, in whose Districts this project lies.

We have taken a close look at the northside of Hearst Ave and feel protected bike lanes are entirely doable. The street is 56ft wide, providing plenty of room for protected bike lanes by removing a minimum of up to four on-street parking spaces over and above the buffered bike lane designs in current plans. We also feel the loading zone issue at Earl Warren Hall can be a conventional design with the bike lane outside the loading as proposed by staff, but then should immediately transition to curbside bikeway protected from traffic with parked cars.

We realize these changes are being considered in the last few months of design, but this project was originally proposed in 2011 and was awarded funding in 2013. It is through no fault of the public that the timing of these requests are where they are at. Regardless, we feel our request is doable, and should a goal for a city with 10% bike commute mode share, on a street leading directly to UC Berkeley where a recent transportation survey of staff, faculty and students showed that 12% of commute trips are made by bike. In our opinion, this is a perfect project to show that protected bike lanes will be popular with the vast majority of Berkeley residents using Hearst Ave to commute.

Cities such as El Cerrito, Richmond, Albany, Alameda, Oakland, Walnut Creek and Emeryville are designing and starting to construct protected bike lanes. Shoreline Drive in Alameda was finished earlier this year; Emeryville is currently constructing a protected bikeway on Christie Drive and Oakland will soon start construction of parking-protected bike lanes on Telegraph in the KONO District. It’s time now for Berkeley to get in this game.

In fact, the time was yesterday to be in this game. Berkeley’s 2002 Climate Action Plan places a particularly heavy burden on us all to reduce polution from cars, and new protected bike lanes are a big part of the solution.

“Vehicle trips account for about half of total community-wide emissions. The Climate Action Plan sets the goal of reducing transportation emissions by 33% below 2000 levels by 2020 and 80% by 2050. To say that achieving this target requires significant change is an understatement. Transportation modes such as public transit, walking, and cycling must become the primary means of fulfilling our mobility needs and remaining motor vehicle usage must be far less carbon intensive.”

Berkeley currently reports that greenhouse gases have decreased 3% from 2000 levels. With five years left until the year 2020 goal of a 33% reduction, significant change indeed is needed. Bike East Bay submits that protected bike lanes on Hearst Ave are a significant change in our bicycle infrastructure, and buffered bike lanes are not. Buffered bike lanes often become auxiliary loading and drop off spots for cars and trucks, blocking the bikeway and further discouraging people from bicycling.

These two recent national reports evidence that it takes protected bike lanes to achieve significant changes in the number of people bicycling: 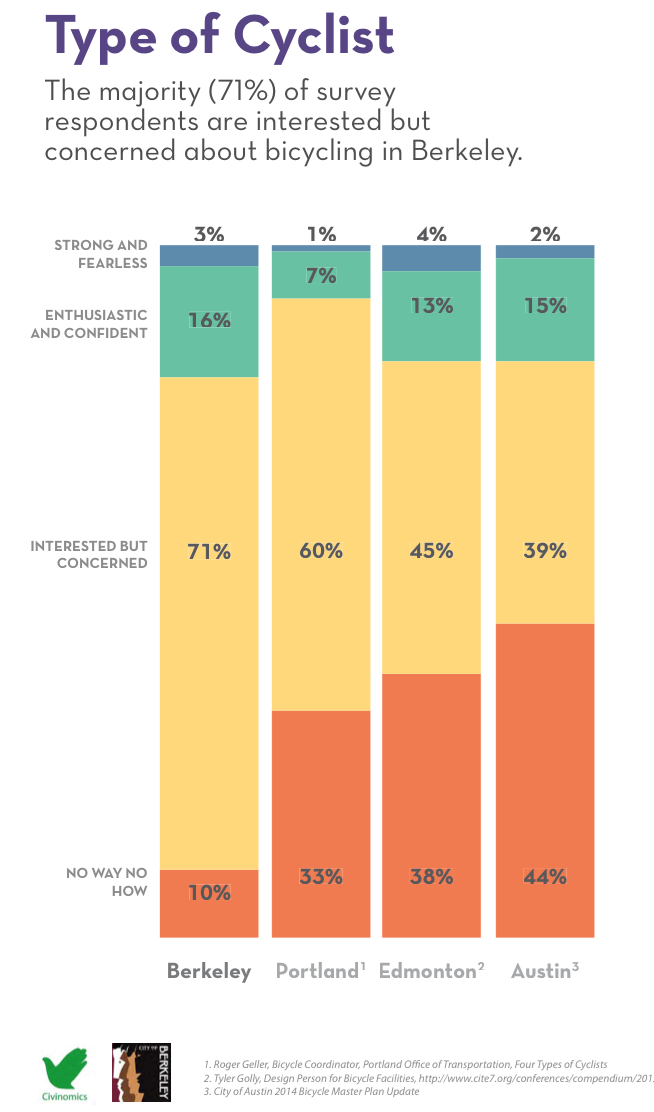 Separated bike lanes have great potential to fill needs in creating low-stress bicycle networks (generally separated from heavy vehicular traffic or sharing the road with motorists only on very low-volume residential streets). Many potential bicyclists (including children and the elderly) may avoid on-street bicycling if no physical separation from vehicular traffic is provided. This cohort falls into the “Interested, but Concerned” category. To encourage this group to use cycling as a transportation option for short to moderate length trips, many municipalities are focusing on creating a connected bicycle network that “Interested, but Concerned” riders will confidently use.

This last point is of particular relevance in Berkeley where recently we learned from the City’s public opinion survey that 71% of Berkeley residents are ‘interested but concerned,’ that is they are interested in bicycling but are concerned about their safety. This 71% is higher than similar figures recorded in other other US cities. It’s not surprising as Berkeley is a top five city nationally for bicycling and has better weather than all the other cities it is in competition with, save Palo Alto.

To acheive Berkeley’s 2002 Climate Action Plan goals of a 33% reduction in greenhouse gases by 2020, Berkeley needs to start building a network of low-stress bikeways that connect all parts of Berkelye, and this includes protected bikeways on busy streets such as Hearst Ave. We have ridden new buffered bike lanes on Broadway and E.12th St in Oakland and they are anything but low-stress.

We appreciate many of the other proposed improvements in this project, including bike boxes, green paint in conflict zones, bus boarding islands, and a bicycle traffic signal at Euclid. And we also appreciate that staff is considering protected bike lanes east of Oxford, on the campus side of Hearst Ave between Oxford and Arch. Such a protected bike lane will create a consistent experience with the planned protected bike lanes east of Arch in the uphill direction. We also note that this project’s design from the start included a compromise of downhill sharrows on Hearst Ave between Euclid and Arch, in order to preserve on-street parking along a long stretch of Hearst Ave where back in 2000 six tennis courts and a skatepark were converted to a parking lot by UC Berkeley. We accepted this compromise from day one and have not challenged it to date.

Overall, this is a good project and we appreciate the City’s and UC Berkeley’s prioritizing it. However the project needs to be better and all involved–residents, staff, advocates, and elected officials need to become comfortable with the reality that moving forward, bikeways on busy street should be designed next to the curb and protected or at least separated from traffic, both moving traffic and parked cars. People are tired of dodging traffic, and no one should be expected to do so on new facilities.

Thank you for improving this project and including to the maximum extent feasible the inclusion of curb side bikeways protected from traffic.

Our award-winning education program, mentioned in The Wall Street Journal, is more than great FREE classes for all ages and skill levels. Check out BikeEastBay.org/Education for theft-prevention tips, advice on using your bike to do more things and go more places, updates on pertinent laws, and community resources