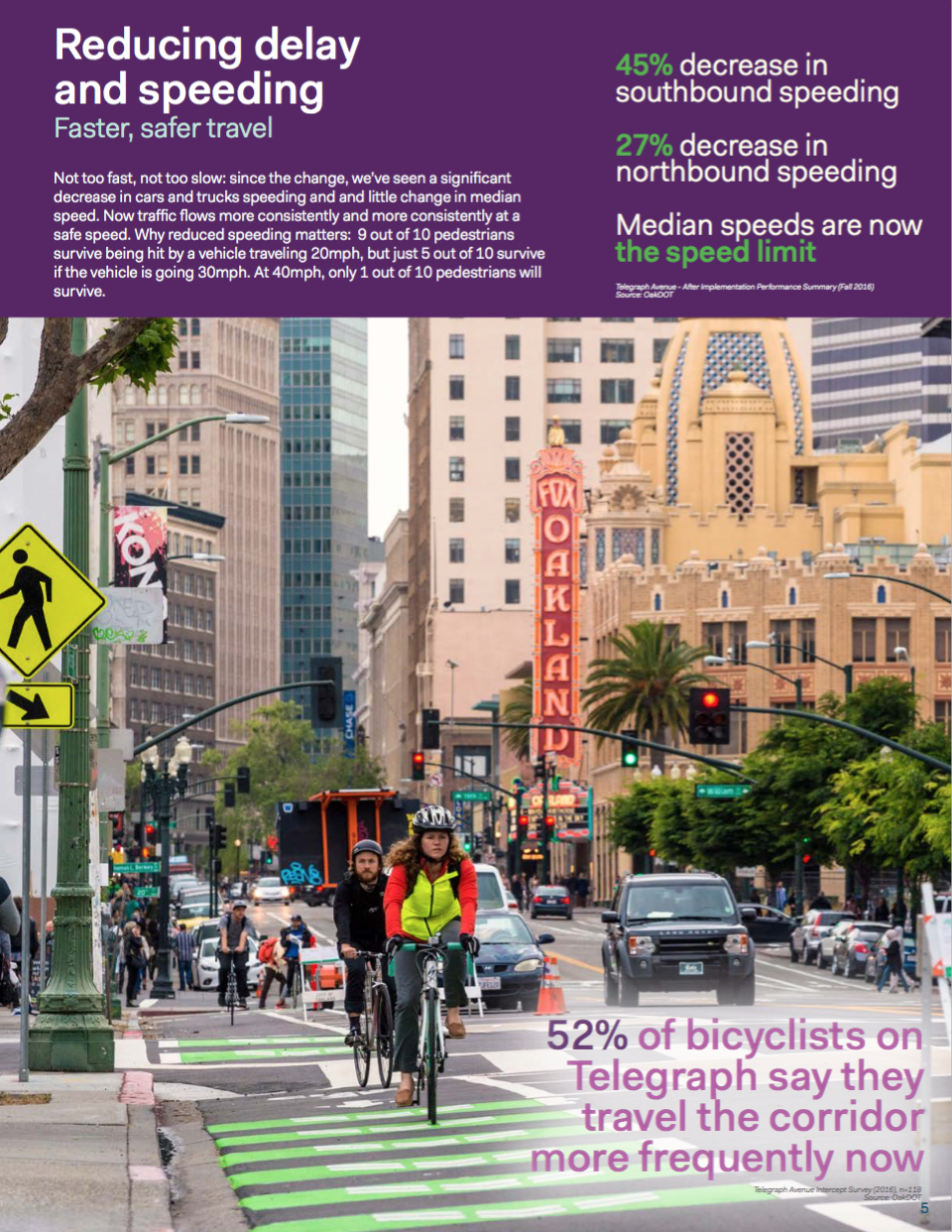 It’s remarkable what a fresh coat of paint can do. Eight months after Oakland painted parking protected bike lanes on Telegraph Avenue, a new City report says biking and walking are up, crashes are down, and drivers are finally going the speed limit. The vast majority of bicyclists (79%) on the street report feeling safer and 52% of them are biking more. With the numbers headed in the right direction, Bike East Bay is now working with the city to fix continuing problems with illegal parking.

The City is well aware that drivers who park in the wrong places continue to create serious problems for all street users. Bicyclists and drivers alike report decreased visibility at intersections because they cannot see around cars illegally parked in the beige no-parking corner areas. This is especially a problem when drivers cross the bike lane to turn on to Telegraph from a street. Despite notably increased enforcement on the street, drivers continue to park in the bike lane as well, blocking the way for bicyclists.

Facebook user Alex Stone wrote, “[t]he bike lane is great. Would still love to see some better tactics for keeping cars out of that lane, which force cyclists either between two closely parked cars (or a moving and a parked one) or into the now single lane of traffic that doesn’t expect cyclists. It happens almost every time I use it and is especially bad on weekends and evenings.”

Bike East Bay has been pushing the Oakland Department of Transportation (OakDOT) to install physical barriers that help drivers parked in the right places. This means you will soon see more physical separators that prevent cars from parking in the beige corner areas, which will improve your visibility to motorists. Later this year, the city also plans to add vertical elements in the buffers to deter parking in the bike lane, and planter boxes throughout the project.

The City of Oakland piloted Telegraph as a paint-only pilot project because staff wanted to be able to easily adjust the street design improvements were needed. Now that we know what works — and what are the growing pains — Bike East Bay will continue working with OakDOT to make sure your feedback improves the project and helps improve the designs of many more protected bike lanes throughout Oakland.

Traffic speeds are down to the point where traffic is flowing consistently at the speed limit–25mph. For people walking and bicycling, this is not only safer but refreshing. 63% of people walking Telegraph report feeling safer with the changes and in 2016 for the first time in five years no pedestrian collisions were reported in the KONO District. Overall, collisions on Telegraph Avenue are down 40%, a great trend.

To some, however, cars going the speed limit seems like congestion, but it is how streets are suppose to work. Reduced speeding matters because it saves lives, as a person is much more likely to survive or suffer lesser injuries if hit by a car traveling the speed limit. On Telegraph, another huge benefit of safe vehicle speeds is people walking across Telegraph Avenue experience a 400% increase in drivers yielding at unsignalized crosswalks. Before, pedestrians waited on average for four cars to speed pass before the next car yielded. Now, on average pedestrians wait for one car to pass.

For bicycling, commute hour bike trips are up 78%, with 52% of people bicycling reporting they ride more often on Telegraph Avenue thanks to the changes. And, despite significant transit service changes, Telegraph Avenue saw the peak hour share of people biking, walking, and taking the bus climb to almost 30%, another good trend.

Increased walking and bicycling is good for business too. While not directly attributed to the new bike lanes, sales in the KONO District are up 9% over 2015 sales, and are up more compared to changes in retail sales in other business districts in Oakland. From this you can conclude one of two things: 1) walking and bicycling improvements are good for business, or 2) they at least do not negatively affect retail sales.

You have asked whether the City tickets drivers “parking dirty” on Telegraph. The answer: most definitely. Since May 2016, Oakland’s Parking Enforcement officers have issued double the number of monthly citations along Telegraph. Note that it’s never preferred to enforce your way to a good design. We don’t want people to think of Telegraph as just a place to get a parking ticket, but there does need to be potential for ticketing.