In Pleasanton on the morning of June 23, a 72-year-old Tri-Valley resident was struck and killed by a driver while bicycling. This is at least the fifth collision involving a person bicycling at the busy intersection of Valley Avenue, Stanley Boulevard, and Bernal Avenue. Our hearts go out to the victim’s family at this difficult time.

It is time to fix this intersection

The Valley Avenue and Stanley Boulevard intersection has long been a gap in the Iron Horse Trail, and for years Bike East Bay and local advocates have been calling for improvements at this location. The Iron Horse Trail extends 30 miles from Livermore to Concord, and is used by many bicyclists to commute, access BART, and for recreation. The vast majority of the trail is a safe, calm bikeway that is welcoming to bicyclists of all ages and abilities. However, there are several glaring gaps where the trail disappears, leaving people to navigate intersections with multiple lanes and high volumes of fast-moving car traffic. Thursday’s fatal collision occurred at just such an intersection. We at Bike East Bay believe it is high time for the City of Pleasanton to address safety issues at Valley Avenue and Stanley Boulevard that put bicyclists at risk. Tri-Valley residents bicycling through this and all busy intersections should be able to cross quickly and conveniently without risking their lives.

On behalf of our 4,000 members in the East Bay – many of them in Pleasanton – we are asking the City of Pleasanton to take the following actions:

Bike East Bay and Bike Pleasanton have met with Pleasanton city staff and elected officials at this very intersection several times to discuss how to make it safe for bicycling in the short term and how to complete the Iron Horse Trail in the long term. On multiple occasions, local advocate Jim Van Dyke categorized it as “the city’s most dangerous intersection for bicyclists and pedestrians” and communicated concern that a future bicyclist death was likely to occur here. Though he and other residents are frustrated by the delays in addressing the safety concerns at this intersection, we see this moment as an opportunity to look forward at how Pleasanton can prioritize safety and convenience for bicyclists in the future, both short- and long-term.

A vision for the future

Bike East Bay attended Pleasanton’s Bicycle, Pedestrian, and Trails Committee meeting on the evening of June 27. The meeting was extremely well attended, with more than thirty bicycling advocates present to express their concern and commitment to safer bikeways in Pleasanton. Though the mood in the room was one of urgency, advocates were also energized and hopeful about the possible future of Pleasanton’s bicycle network. While the community agreed that an immediate fix for the intersection in question was of the utmost necessity, we also shared a vision for a complete, connected, and protected bikeway system in Pleasanton and throughout the Tri-Valley region. Members of the committee spoke on their commitment to better bikeways and urged bicycling advocates to attend city council meetings and continue their engagement. We will continue working with city staff and local advocates to make this vision a reality.

A vision for the future, with a network of protected bike lanes (green), dedicated paths (brown) and neighborhood bikeways (purple). 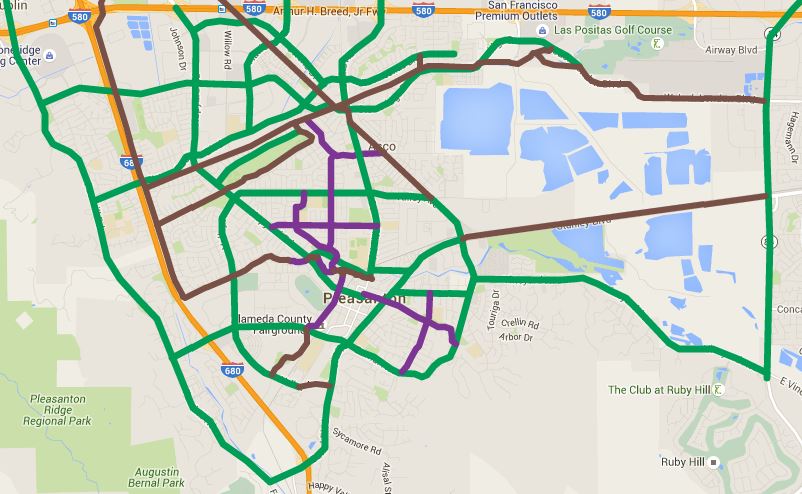 To stay engaged with progress at Stanley Boulevard and Valley Avenue, as well as other intersections throughout the city, join the Bike Pleasanton Facebook group. Visit Bike East Bay’s Updates page to learn more about our work in this and other East Bay cities.