In Berkeley, like in all cities, drivers are injuring and killing far too many people, but unlike any other city, Berkeley is ready to chart its own course for safer streets, again. On September 13, Councilmember Terry Taplin (District 2) introduces a Council resolution directing city staff to prioritize the safety of people walking and bicycling above that of moving traffic, and for the first time provide clear guidance to staff on how to do it. The villain of this story is the CAMUTCD, the evil state manual that sets standards or “warrants” for how and when cars have priority and why cars should not be slowed down in order for school kids to safely cross the street. The policy would require staff in effect to stop using state standards as a default and start using their good old fashioned engineering judgment, as well as the NACTO Urban Streets Design Guide, as the two most important criteria for designing safe streets, and do so for every dollar spent on city streets. 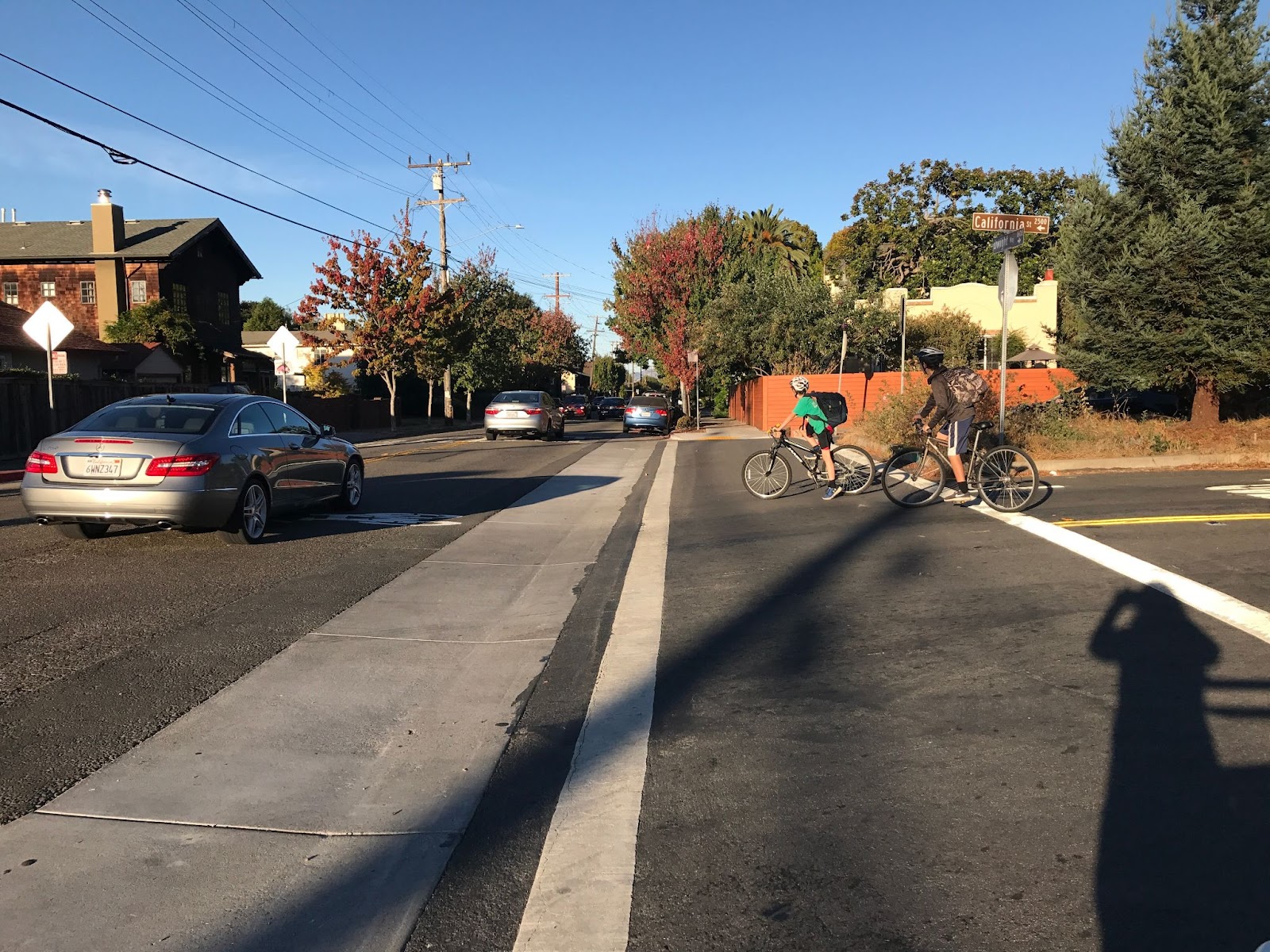 Take a look at the intersection of California Street and Dwight Way to get an idea how this could work. For decades residents have asked to make this busy boulevard crossing safe for kids going to school, but staff have pushed back on these efforts to stop cars, arguing that CAMUTCD’s standards require that more kids walk and bicycle than currently do, or that more of the kids who currently walk and bike first get hit by a car, before installing a traffic light or a stop sign.  Rather, on and off efforts were made to narrow the wide intersection relocate crosswalks, and now install some flashing lights,  at great expense of everyone’s time to avoid violating CAMUTCD’s standards against stopping cars for a few kids. As a result and going forward, cars continue to have the right of way over bikes, and effectively over pedestrians too–some cars may stop, most won’t. The theory traffic engineering uses here is that drivers won’t stop, even if Berkeley puts up a stop sign on Dwight Way, because drivers won’t expect kids crossing there, and thus it could be more dangerous for kids to cross. This of course is airtight logic to continue prioritizing movement of cars, with the CAMUTCD standards giving the traffic engineer an easy “out” and requiring no judgment be used at all.

It’s the same traffic logic that prevents cities from lowering speed limits below any speed people “expect” to drive on streets, or installing transit improvements that could back up traffic, or preventing vehicle right turns across crosswalks when pedestrians are present. The convenience of drivers sets the rules, at the expense of people’s safety. All of which is bad enough if only one city is doing this, but the CAMUTCD ensures all California cities do this–prioritize cars–so that no driver in this state unexpectedly has to pay attention and stop for people crossing the street. With Taplin’s directive to staff, Berkeley’s traffic engineer will have to instead use their own engineering judgment about what safety means in Berkeley, carefully weighing safety benefits when cars stop for people crossing versus any safety concerns of some cars not stopping, and document this based on data, not blindly relying on CAMUTCD standards.

The timing for this good for several reasons. At the national level, the Federal MUTCD is being updated as we speak, with its usual priorities for moving cars. Berkeley essentially is thumbing its nose at federal traffic engineers. You can activate your thumbs too with support on September 13. In addition, Berkeley voters go to the polls this November, and will be asked to vote on Measure L, a $650 million bond measure to build affordable housing, repair streets and sidewalks, underground utilities, and enhance buildings, infrastructure, and safety. The money from this bond that is spent on streets should all be spent on safety improvements first. Walk Bike Berkeley and Bike East Bay advocated for this. Taplin’s proposal will not only keep you safer, but should help build more support for Measure L, which in turn will fund more safety upgrades–the airtight logic we prefer.

Berkeley City Council probably does not need reminding about its past inspirations to improve the lives of Berkeley residents. Berkeley is the city of the first curb cuts for ADA access, the first traffic diverters to control cut-thru traffic in neighborhoods, the first bicycle boulevard symbols, and more recently the city that eliminated exclusionary zoning. Sometimes Berkeley knows best.