Active Shoppers Are Majority of Buying Power in Temescal District

UC Berkeley’s Transportation Studio has just released a study of shopping and travel patterns in the Temescal District of North Oakland1 and it turns on its head conventional assumptions about how shoppers travel, where they come from and how much they spend. The take away: most Temescal shoppers are local, two-thirds are active shoppers—they walk, bike & take transit—and these active shoppers spend more money overall than shoppers who drive. The data in this report is consistent with numerous other studies about economic activity and travel mode, from Portland2, New York3, Toronto4 and San Francisco5. It underscores yet again that people shop, not cars, and debunks the belief held by many merchants that their bread and butter is delivered on four wheels.

The Usual Mode chart to the right shows mode shares of shoppers coming to the Temescal District-defined from 37th St to 51st St, essentially encompassing the Temescal shopping district and the area around MacArthur BART.  232 responses were received in a one-page survey to the question ‘how do you usually arrive?’ The survey was conducted by graduate students on street in the Temescal District during November, 2014. The report details that 25% of shoppers walk mostly from the adjacent neighborhoods of the 94609 zip code, 23% take transit (bus and BART combined), 10% bicycle and 32% of shoppers drove (either alone or with others).

If shoppers all spent about the same amount of money regardless of how they arrive, the story would end here. But take a look at ‘The Average Monthly Spending by Travel Mode’ chart below, which was developed from the students’ shopper intercept survey, asking customers in addition to how they usually travel to the study area, also how much they typically spend per visit and how often they come. By multiplying the usual spending amount by the frequency of visits you get the monthly spending totals per mode of travel, and you can see that shoppers walking, bicycling and taking the bus spend more money per month than shoppers who drove. This data is comparable to spending levels by mode share from the previously cited studies done in Toronto, Portland, and San Francisco. Even a recent Safe Routes to Transit study of the MacArthur BART area found that people walking, bicycling, and taking transit to MacArthur BART spent more money on food and drink on their way to BART than people who drove to BART.6 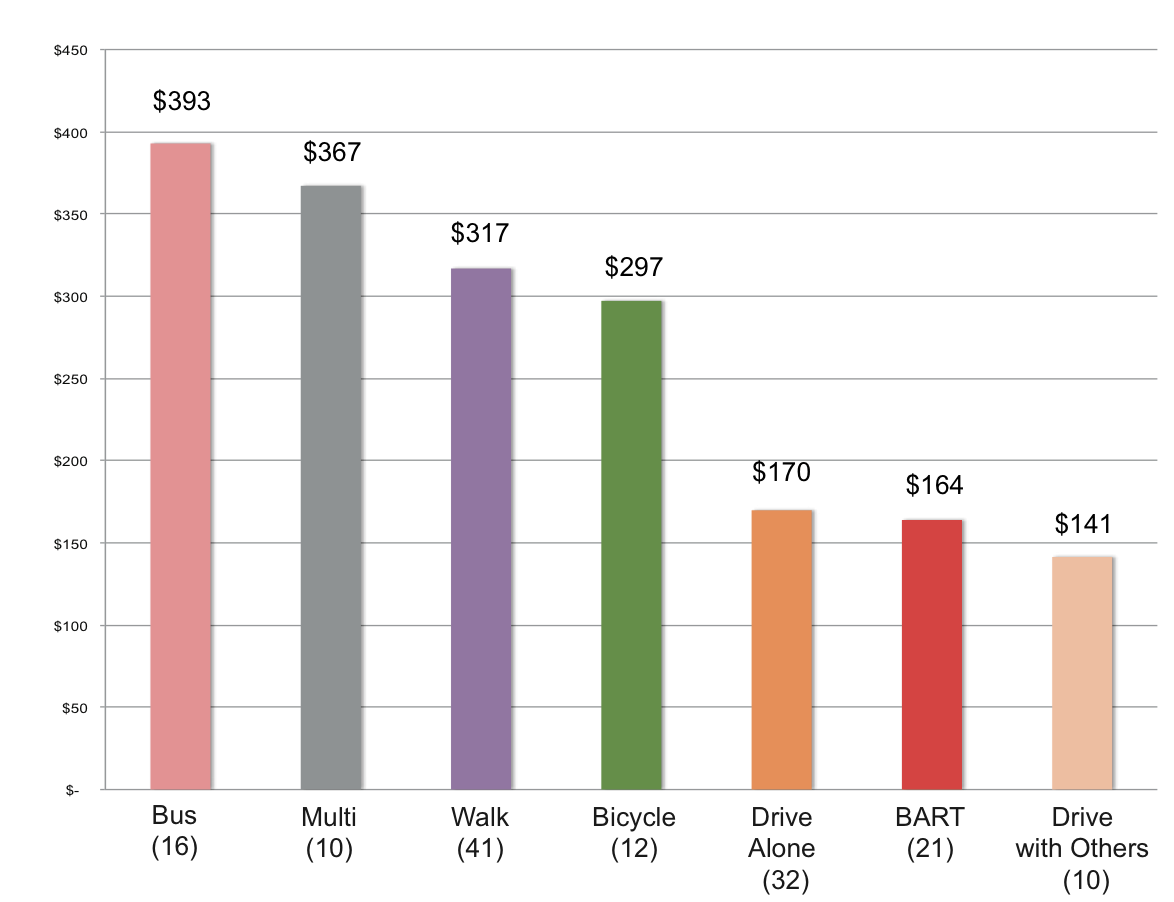 The UC Berkeley Transportation Studio also surveyed merchants and asked them how they thought their customers usually arrive. 87% of merchants said they feel most of their customers drive, contrary to the 32% of shoppers who said they drove. 34 local businesses responded to the survey, about 44% of them retail, 36% service businesses, and 20% restaurant/bar.  Merchants also expressed dissatisfaction with parking availability for their customers, discussed later.

Active Transportation Is Where the Bucks Are

What Could Protected Bikeways Do for Temescal?

A study from Portland State University–Lessons from the Green Lanes: Evaluating Protected Bike Lanes in the U.S.7, showed that bicycling increased anywhere from 21% to 171% on streets where protected bike lanes were built. The study looked at eight study projects in five cities across the US, and found that the average increase in biking after protected lanes went in was 75%. And by a margin of 2-1 roadway users agreed that streets with protected bike lanes work better for all users. In New York, their own DOT studies have shown bicycling increases as high as 177% on streets after new bikeways are installed.

Telegraph currently has no bike facilities, but 10% of the traffic on the street is bikes, data gathered from the Telegraph Avenue Complete Streets Plan. If Oakland built protected bike lanes on Telegraph Ave and bicycling increased by the average amount shown in other cities with new protected bike lanes–75%, the buying power of bicyclists would rise to 21%, surpassing that of drivers on Telegraph. Imagine that! While this UC Berkeley study found that 32% of shoppers come by car, either drive alone or with others, merchants responding to the survey said that they believe a majority of their customers drive. Yet the report details how 59% of shoppers come from neighboring zip codes. This same disconnect happens among merchants in other cities in the US and in Europe. In The Netherlands and Copenhagen, it is still common for merchants to want more car parking, even though a majority of their customers walk, bike, and take transit, and in numbers greater than in the Temescal. The reality is that 2/3s of Telegraph shoppers come by BART, bus, walk, and bike, and 59% of shoppers are local—they come from the 94609 zip code, or one of the adjoining zip codes within walking and bicycling distance. And they spend more money. While overall 10% of shoppers rode a bike to the Temescal District, the study broke out shoppers in the heart of the Temescal (48th St-52nd St) and found that here 13% of shoppers rode a bike, while 42% come by car. Compare these numbers to traffic counts from Oakland’s Telegraph Avenue Complete Streets Plan, where for the 4-block stretch of Telegraph from 48th St to 52nd St, 10% of on-street traffic is people bicycling, and 90% is cars. Much of the car traffic is cut-through traffic, with people driving through on their way elsewhere. Let’s compare the numbers: the ratio of car traffic to bike traffic is 9-1 in the heart of the Temescal (maybe 8-1 if you factor out trucks), but the ratio of car shoppers to bike shoppers is only 3-1. Taken together, the UC Study and the city traffic data support conclusions from similar studies that people bicycling stop more often to shop than drivers. You can’t window shop from behind a steering wheel or make a quick stop to pick up something, particularly if you are just cutting through, but you can from the saddle of a bike–and bike shoppers do.

The potential to encourage even more shopping by bike from local residents is significant. Nearby residents bicycle for 15% of their trips of all types, and 77% have a bike, according to the UC study. Businesses will earn more money if they increase marketing to nearby residents because their shoppers are local, own a bike, spend more money when they bike than when they drive, and are already bicycling in higher numbers overall then shoppers bicycling to the Temescal District to shop. The bicycling shopper is a low-hanging fruit for the Temescal District.

Many business districts in Long Beach understand this, and have formed ‘bicycle-friendly business districts.’ They offer discounts to shoppers who come by bike, provide bike valet for regular bike-themed events and promotions, make cargo bikes available to local businesses for their hauling needs, and support better on-street bike facilities for the safety of the customers. Bike East Bay has already approached the Koreatown Northgate business district about becoming a bicycle-friendly district and we plan to talk with the Temescal District as well. It’s a partnership that can lead to broader support for better bike facilities when Oakland looks at Phase 2 of the Telegraph  Avenue Complete Streets Plan.

When Oakland further studies bike lanes in the Temescal as part of Phase 2, the discussion is likely to boil down to a choice between repurposing either a travel lane or a parking lane. At public open houses in September 2014, Oakland asked attendees which option they prefer, and most said repurpose ‘parking.’ While both options have potential, merchants are concerned about the lack of parking for customers. Reprogramming the traffic light at Telegraph & 51st to better reflect the neighborhood priority of the street is a good option for extending the bikeway without removing a parking lane, but one the City has not studied. For parking removal, any change would have to be carefully studied and managed to ensure customers who need to drive can readily find a spot.

There are two good parking options worth exploring. One involves getting more employees to take alternative transportation and the other involves better management of existing public parking spaces. The UC study surveyed employees who work in the Temescal District and learned that 51% of them drive to work. Of these who drive, 39% park on the street, most of them in free spaces, taking valuable nearby spaces from shoppers who need to drive. Ten blocks of Telegraph in the Temescal has free, unregulated parking, allowing parking all day if desired.

In addition, Oakland should install smart meters on Telegraph Ave, which adjust the price of parking based on demand. Berkeley and San Francisco have implemented similar schemes. Smart meters ensure that, of the metered spaces, 15% are vacant, so drivers can always find a space quickly. They do this by raising the price to encourage shoppers who are willing to park in off-street public parking spaces, which Temescal has a good supply of. An additional benefit of increased parking revenues from on-street parking is that the money raised can be used to market the Temescal Shopping District, or help pay for employee transit passes–a win-win.

The importance of bicycling is much higher on Telegraph Avenue when you consider the street as a local neighborhood commercial corridor, rather than an arterial cut through street, as it has been looked at for many decades. People bicycling are competitive shoppers to other modes already on Telegraph Avenue, and this with no current bicycle facilities. The installation of bike lanes on Telegraph is only going to increase the success of local businesses, as will making the street safer and more inviting for pedestrians and a better street for transit.

We look forward to working with all local businesses and residents on Telegraph Avenue as the complete streets project is implemented in phases over the next few years. We are confident this project is going to give other commercial areas a different perspective on how Oakland shops.