The new Bancroft Way features a two-way protected bike lane (cycle track) that connects Fulton Street’s protected bike lane to UC Berkeley’s cross-campus bikeways and Dana Street’s bike lane. The new cycle track allows you to bike uphill for the first time on Bancroft Way. Additionally, the new bus-only lane is be painted a terracotta color to make a clear distinction between its bus priority and vehicle travel lanes. The result is a safer more efficient path for bikes, faster routes for buses, and shorter crosswalks for pedestrians, all on a nicely repaved roadway.

Let us know what you think. 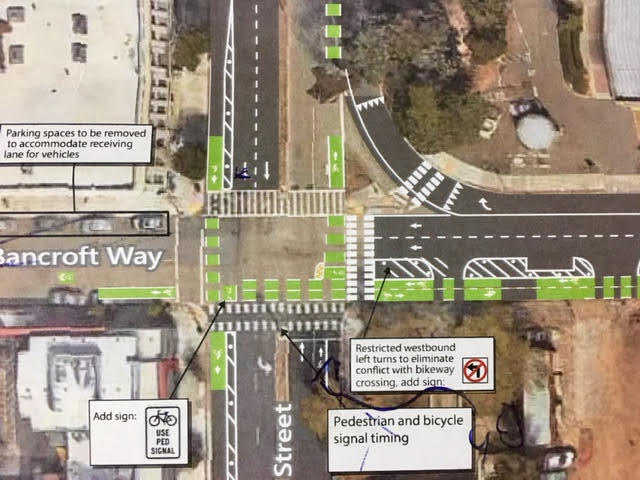 The terracotta bus-only lane will be an extension of the existing bus-only lane that spans from Barrows Lane to Dana Street. This provides bus riders an exclusive fast lane that should increase the reliability of AC Transit’s bus schedule, specifically that of the F, 52, 51B, and 49 bus routes.

The new road layout creates several benefits to pedestrians. The addition of the cycle track and bus-only lane creates a buffer for the sidewalk, separating fast-moving cars from pedestrians. Additionally, the narrower road instinctively causes drivers to drive more slowly, making it more likely vehicles will yield to crossing pedestrians. This is very important at crossings like the north-south crossing at the Ellsworth/Bancroft intersection. Finally, cycle track now provides a path for eastbound cyclists that have historically biked on the sidewalks, creating a safer and more comfortable sidewalk for pedestrians.

Despite the removal of parking on the north side of Bancroft, parking availability along the corridor is actually expected to increase. The city is working on installing diagonal parking along Durant, which should more than offset the parking spots lost to the bus-only lane. The cycle track actually preserves most of the parking spots because it is parking-protected.

The new West Bancroft Way should become a more walkable, bikeable road that everyone can feel safer on, and is just one section of the larger Southside Pilot Project. The ultimate goal is to make Southside safer to travel on bike and by foot, more convenient to travel via bus, and more welcoming for the thousands of people who transit the Southside area.